Born in mid-19th century Britain, this young man was brought into a world that that did not suffer hard times easily. His father’s business failed a few years after he was born, and when his father immigrated to America to remake his fortune, as many others were doing, his dad was robbed and murdered before he could send for his family.

The resulting financial crisis the family experienced forced the young man to leave school at 15. He eventually became a private secretary, a position that would today be described as an administrative assistant. He worked in this capacity for several British manufacturers until finally in 1902, he decided to devote all his time to his writing.

You see, unlike the prevailing thoughts of the times, this young man believed in the power of thought to bring him fame, fortune, and happiness. What is curious about him is that he remains largely a literary mystery man. While his inspirational writings have influenced hundreds of millions of people and from which some of the more popular genera of self-help books have arisen, today he is almost an unknown. Few of his books give a clue to his life other than where he lived. His name, shamefully, cannot be found in any major reference work. Not even the Library of Congress or the British Museum have a lot to say about him or his life.

The name of this father of self-improvement is James Allen. And in his world, he never gained fame or fortune. He was a quiet, unrewarded genius rarely making enough money from his written words to cover his expenses.  Short as his career was (about nine years), he died in 1912, having written 19 books and leaving future generations with a rich outpouring of positive ideas that continue to inspire us even today.

Himself inspired by Russia’s great novelist and mystic Count Leo Tolstoy, James Allen lived a life of voluntary poverty, manual labor, and ascetic self-discipline. Like Tolstoy, Allen labored daily to improve himself, be happy, and master the virtues of life. His search for happiness for man on this earth was typically Tolstoian behavior.

A Master of Self-Help

A philosopher at heart, after the publication of his first book, From Poverty to Power, he and his wife moved to a small resort town with seafront Victorian hotels, rolling hills, and the quiet surroundings so necessary for his studies and philosophical creativity. 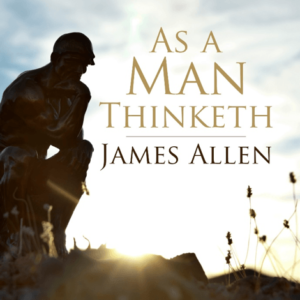 His second, more well-known second book, As a Man Thinketh was his most concise and eloquent work. The book was the physical embodiment of his deepest thoughts and yet he, himself, managed to miss its deep resonating value. His wife had to persuade, i.e., force, him to publish it. It became one of his most popular and continuing successes.

His days were as you might have imagined them, a predawn walk to a rock outcropping overlooking his home and the sea, taking a place there for an hour’s meditation. Then the walk back home and to a morning of writing. He spent his afternoons devoted to gardening, with his evenings spent in conversation with people who visited and who were interested in his work.

This real-world lion of self-help was described as a frail man, Christ-like in appearance, with a mass of flowing, jet black hair. One of his friends describes him this way: “I think of him especially in the black velvet suit he always wore in the evenings. He would talk quietly to a small group of us—English, French, Australian, and Indian—of meditation, of philosophy, of Tolstoy, or Buddha, of killing nothing, not even a garden mouse.” Another friend wrote, “He overawed a little because of his appearance, his gentle conversation, and especially because he went out to commune with God on the hills before dawn.” 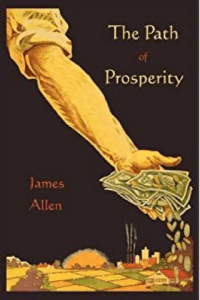 The times were different then and the approval of the religious community was much more important than today. The publication of James Allen’s philosophy only became possible with the changes occurring when liberal Protestantism backed away from its harsh dogmatic belief in the sinful nature of man. For years it was accepted that man was sinful by nature, being the inheritors of the original sin, but with the changes over time, the old dogma was replaced by an optimistic belief in man’s innate goodness and divine rationality.

William James, father of American psychology and one of the most influential philosophers of the last 100 years, described the reversal of doctrine as the greatest revolution of the 19th century. In fact, it was part of the move to reconcile science and religion following Charles Darwin’s publication of The Origin of Species. 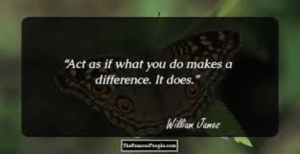 Darwin clearly hinted at the change in belief in The Descent of Man when he wrote, “The highest possible stage in moral culture is when we recognize that we [ought] to control our thoughts…”

Unlike many authors of the day, and even today, James Allen managed to elegantly and successfully combine Protestant Liberalism in one hand, with Buddhist teachings in the other. The Buddha teaches us, “All that we are is the result of what we have thought.” Allen’s Biblical text says “As a man thinketh in his heat, so is he.”

The Power of the Individual

Unlike the collectivist thinking of the day, Allen insisted that the individual has within himself the power to form his own character and to create happiness for himself. He maintains that thought and character are one, and as character can only manifest and discover itself through environment and circumstance, the outer conditions of a person’s life will always be found to be harmoniously related to his inner state of being. Now, he isn’t suggesting that your circumstances are an indication of your entire character, but rather your circumstances are intimately connected with some vital thought-element essential to your development.

Allen starts you thinking, even when you would rather be doing something else. He reminds us that in his day—taught for perhaps the first time in Britain—that thoughts lead to actions. He shows how to turn dreams into realities. His philosophy has brought success to millions and was the precursor to Norman Vincent Peale’s The Power of Positive Thinking, and Joshua Liebman’s Peace of Mind.

The Power of Thought

Allen’s message, unique in his time, was one of hope even during confusion. And the early industrial revolution was a confusing time. Yes, he does say that humanity roars with uncontrolled passion, is tumultuous with ungoverned grief, and is blown about by anxiety and doubt. Sound like last November? Yet he taught that only the wise man whose thoughts are controlled and well managed “makes the winds and the storms of the soul obey him.”

Tempest-tossed souls, Allen writes, wherever you may be, under whatever conditions you may live, know this: In the ocean of life, the isles of blessedness are smiling and the sunny shore of your ideal awaits your coming.

He maintained until his passing that we become spiritually rich when we discover the adventure within, when we become conscious of the oneness of all life, and when we know the power of meditation and experience, then we experience our kinship with nature.

So what does all of this mean to us today, other than a quaint history lesson? Allen taught two essential truths that are relevant today. First, we are where our thoughts have taken us, and second, we are the architects of our future, for better or worse. It doesn’t take a village; it is your singular effort to improve your character and your mindful soul that makes all the difference.

James Allen’s writings are exceptionally practical in nature. He never wrote theory, or wrote to hear his words spoken, or even as some authors do even today, to add to one of his existing books. According to the words of his wife Lily, he wrote when he had something to say, when he had a message, and it only became a message when he had already lived it in his own life and knew it was good.

So, unlike many of the self-help authors of today, he wrote only facts he had proven through practice in his own life.

The following are some of his more famous quotes. It won’t come as surprise if you recognize any of them in the teachings of modern self-help gurus today. Nothing’s a secret.

“All that you accomplish or fail to accomplish with your life is the direct result of your thoughts.”

“Above all be of single aim, have a legitimate and useful purpose, and devote yourself unreservedly to it.”

“To put away aimlessness and weakness, and to begin to think with purpose,

is to enter the ranks of those strong ones who only recognize failure as one of the pathways to attainment,

who make all conditions serve them,

and who think strongly,

“To begin to think with purpose is to enter the ranks of those strong ones who only recognize failure as one of the pathways to attainment.”

“The will to do springs from the knowledge that we can do.”

“In all human affairs there are efforts, and there are results, and the strength of effort is the measure of the results.”

“Harmony is one phase of the law whose spiritual expression is love.” 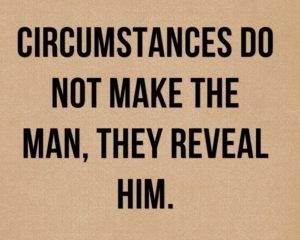