There are few blessings bestowed upon us by the social sciences as significant and inescapable as the Implicit Association Test (IAT). It was presented to the worshipful world in 1988 by a team of social scientists and has grown since them to be indispensable as a tool for marketing researchers, business trainers, and others who hope to differentiate, and manipulate the views or behaviors of people. 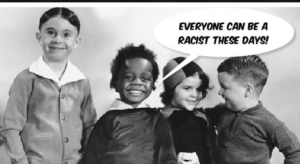 The powers of the IAT are described as large and various, but it’s most infamous use is for presuming to find hidden racial attitudes, or what the re-education trade calls “implicit bias.” The bias is implicit because the poor creature taking the test isn’t aware of his own racism. Individuals who pride themselves on their egalitarian racial views are often the worst offenders. They suggest that it matters now how you behave, only what your implicit views might be

are often the worst offenders.

Of course, like most assessments of this nature, you can take the test online, and millions of people have at a site called “Project Implicit” run by Harvard University. You just press one key or another as faces and words flash on his computer screen. Sometimes unpleasant words appear along side of black people, sometimes beside pictures of white people. Measured down to the millisecond, the subject’s reaction times, i.e., how rapidly he links bad words with black faces and good words with white faces, are reckoned to communicate true racial attitudes. Now here is where the magical thinking comes in; the mechanical process by which ‘‘implicit racism’’ adjusts its travel time from the brain to the fingertips has never been traced, or at least publicly revealed. Still, the Harvard researchers insist that “implicit racism” is found in nearly everyone and, left unchecked, will lead to the brutish behavior we see on our streets today. The “implicit racism” unearthed by the IAT is habitually trotted out to justify any inequality between white people and black people, from income, to family life, and on to criminality. When a white police officer kills a black suspect brandishing a gun, elite journalists and lawyers leap for the IAT. Rare is an officer of the peace, who has long escaped being schooled in the science of his own “implicit racism.”

insist that “implicit racism” is

found in nearly everyone and,

lead to the brutish

behavior we see on our streets today.

But interestingly enough, for several years the [junk] science that backs up the test has been under merciless assault from none other than the academic community itself. In 2015, social scientists, Gregory Mitchell of the University of Virginia and Philip Tetlock of the University of Pennsylvania, developed the academic nerve to challenge the orthodoxy and take a clear-eyed review of the vast, credulous prose on the IAT. Just for giggles, I will quote their far-reaching conclusion directly rather than paraphrase it as I usually would. It is much more powerful that way.

“On issue after issue, there is little evidence of positive impacts from IAT research: theories and understandings of prejudice have not converged as a result of the IAT research; bold claims about the superior predictive validity of the IAT over explicit measures have been falsified; IAT scores have been found to add practically no explanatory power in studies of discriminatory behavior; and IAT research has not led to new practical solutions to discrimination.”

The best science reporters are on the case.

In a meticulous and daring description of the IAT controversy, Jesse Singal, of New York Magazine, concluded that critics had the better evidence and the better argument. He quoted one of the inventors of the test, now a much-decorated professor at Harvard:

“I don’t read commentaries from people who are non-experts”

She actually wrote that in an email. Then she insinuated her critics might be suffering from racism themselves, or something still darker. (There’s that circular argument stuff again.) Regarding their study of the race IAT, she wrote,

“…seems not to be about the evidence.

Intellectual integrity at its finest… yes? So you be the judge of whether or not a couple of Harvard researchers can reach down into your heart and describe your deepest and in their opinion, darkest secrets, magically declaring you a racist.

As for me, I think it is more how you act towards your fellow man and not your dark secrets that describe your life.

Find a Veteran and Thank Him or Her